One of the best things about Spanish wines is the incredible diversity that can be found among them; grape varieties, wine regions, culture and more.

In this webinar we will have Bodegas Felix Callejo, Bodegas Riojanas, Bodegas Terras Gauda, Acústic Celler and Bodegas Hijos De Alberto Gutierrez joining us. We will be discussing the amazing diversity and fantastic amount of indigenous grape varieties of Spain.

Please note that it is a free public event delivered online via Zoom.

Please note that it is a free public event delivered online via Zoom. 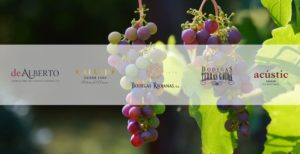 Winemaker, Noelia Callejo will be joining us to talk about Albillo Mayor and Tinto Fino.

Bodegas Felix Callejo is a family winery founded in 1989 by Félix Callejo. It’s the second generation, Cristina, José Félix, Beatriz and Noelia Callejo who continue this exciting legacy. The experiences in other wineries of both José Félix and Noelia provided the basis for further developing a philosophy dump on the soil and to be Vignerons. In 2000, they began to work in an ecological way in their vineyards, a clean, respectful viticulture, full of life for the soils and therefore for their wines.

UK Sales Manager, Dave Roles will be joining us to talk about Godello, Tempranillo Blanco and Albariño.

One of the grand old names of Rioja, Riojanas has produced heroic wines since its founding in 1890 by Frias Artacho family – who had a deep-rooted winemaking tradition stretching back centuries – and a Catalan businessman called Rafael Carreras. Today it owns outright over 200 ha of Tempranillo vineyards in Cenicero, San Vicente de la Sonsierra and other adjacent tracts of vines. It also has in its possession one of the largest vineyards of Mazuelo and Graciano; all vineyards been set on the ideal soil of clay and limestone. As a group, Riojanas has expanded to Toro with Bodegas Torreduero and also produces wines in Rueda, Rías Baixas, Ribera del Duero, Cava, Penedès and more recently Bierzo with the brand Viore.

Area Manager, Mar Dopazo will be joining us to talk about Albariño, Caiño Blanco and Mencía.

A premium boutique winery group, the Terras Gauda wineries were founded in 1989. The original Terras Gauda estates and winery are located in O Rosal in Rias Baixas; the group also encompasses Pittacum in D.O. Bierzo and Quinta Sardonia in the Douro area, the most recent addition to the group founded by Peter Sisseck.
Terras Gauda is a leader in working with the heirloom varieties of Rías Baixas, including Albariño and the rare Caiño Blanco, an indigenous grape used in the O Rosal blend and showcased in the limited bottling, Terras Gauda La Mar. Caiño Blanco almost disappeared from Rías Baixas in the 1980s, until Terras Gauda rediscovered its high quality and launched an ambitious replanting program in 1989.

Owner & winemaker Albert Jané will be joining us to talk about about Cariñena & Garnacha.

Acústic Celler is the personal project of Albert Jané, a young man born in El Vendrell, and whose great-grandfather founded a family-owned wine cellar in the Baix Penedès in 1914. He strictly complies with it, with the local varieties of Grenache and Carignan in D.O. Montsant.

Export Manager Ángeles Jiménez Alonso will be joining us to talk about Verdejo.

The Guttierez family have been producing wines in Rueda for five generations, in a stunning 350-yr-old winery, complete with a kilometre of subterranean ageing cellars. The Verdejo grape is king here and is one of Spain’s top white wine varieties.

We are fully GDPR compliant

GET YOUR FREE GUIDE TO WINE AND WINE TASTING

GET YOUR FREE GUIDE TO WINE AND WINE TASTING